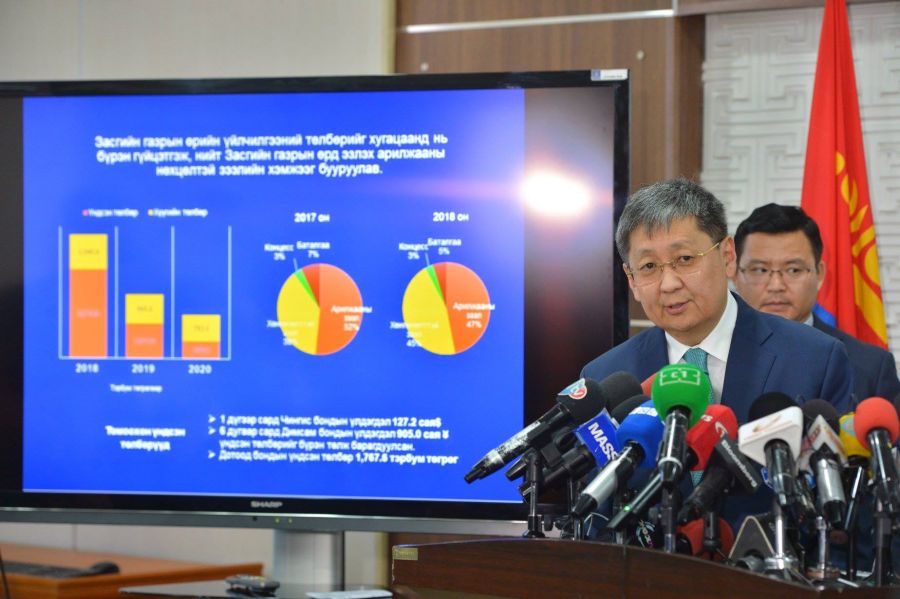 Ulaanbaatar/MONTSAME/ The State Budget revenue exceeds MNT10 trillion for the first time in fiscal year 2018, reported  Finance Minister Ch.Khurelbaatar on January 14. As compared with the approved budget, the revenue increased by 25 per cent.

According the Minister’s report on the performance of 2018 General Government Budget, in the end of 2018 the equilibrated balance of the state budget had a surplus of over MNT12 billion, which has been the first record since 2010. The equilibrated revenue of the budget reached MNT9.2 trillion, not including MNT207 billion of the Stabilization Fund and MNT620 billion of the Future Heritage Fund.

The budget revenue overfulfilled by MNT2 trillion, which was mainly accumulated from the mining sector (MNT670 billion) and others (MNT1.3 trillion).  It is a result of the government policy, growth of economy and investment, intensification of businesses, adherence of tight fiscal disciplines and Mongolia’s credit rating upgrades, noted the Finance Minister.

The Government’s gross debt is MNT21 trillion, but there is not large amount of debt that must be repaid in 2019 and 2020. In the end of 2017, the debt equaled 74.4 percent of the Gross Domestic Product, but it decreased to 60.9 percent by the end of 2018. It is estimated that if this figure is dropped further to 40 percent, there will not be any pressure on the budget.